No RISC No Fun 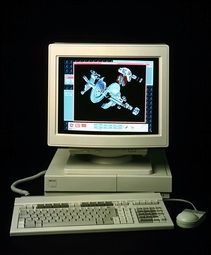 OpenPA is an independent technical resource on HP 9000 and PA-RISC computers and operating systems, used for Unix technical computing. Information on PA-RISC is contained in almost 100 articles published on OpenPA since 1999 on HP 9000 computers, PA-RISC architecture and software ecosystem:

Sources used on OpenPA are mostly PA-RISC technical reference manuals, HP handbooks and architecture documents, correlated with articles and news releases – many disappeared lately. OpenPA is independent of and does not represent HP in any way. Read also the OpenPA book.

HP undertook efforts in the mid-1990s to port Microsoft Windows NT to PA-RISC in order to hedge their bets in the workstation and NT markets. While pursuing a PA-RISC port, HP modified the PA-RISC architecture for bi-endianess and even conducted a back-room presention in 1994 of a PA-7100LC workstation running Windows NT. Reports of this port continued through 1994 and 1995 but sources at HP soon spoke of dim prospects for NT on PA-RISC and a dead-end architecture with a seeming consensus of a post-RISC (Itanium) future around the corner.

In the same era, a port of NetWare to PA-RISC was undertaken by HP and Novell for Processor-Independent NetWare (PIN). NetWare 4.1 was slated to support a variety of RISC architectures such as Alpha, Sun, MIPS and PowerPC. However, development at Novell for PIN on PA-RISC took longer than planned, and HP finally pulled out in 1994 after Novell was unable to deliver Processor-Independent NetWare (PIN) on schedule.

Apparently there was also a prototype of HP-UX on x86 hardware a few years later, when the future of HP-UX and its sole surving platform Itanium came in doubt during the early 2010s. PA-RISC was long gone by then.

Not only HP sold PA-RISC computers in the golden decade of Unix RISC workstations in the 90s. Several third party vendors organized in the Precision RISC Organisation (PRO) sold rebadged HP 9000 computers in East Asia in the mid-1990s or developed custom PA-RISC platforms.

These computers were shipped with Unix operating systems, geared towards technical and scientific users. Vendors either licensed HP-UX Unix directly or slightly modified it like Hitachi with HI-UX/WE2 and HI-UX/MPP or Samsung with SS-UX (?). Documentation on these computers and software is almost nonexistent, few sources describe them at all, except some press releases.

The DN10000 were designed by Apollo based on their own PRISM RISC architecture at the end of the 1980s, before HP bought Apollo and integrated it with the HP 9000 lineup. The Apollo Domain 10000 series were marketed as personal supercomputer geared for complex workstation applications like electronic design automation (EDA) and mechanical computer-aided design and engineering (MCAD/MCAE).

PRISM was the RISC processor released by Apollo in 1988 and the first commercial CPU architecture to include a VLIW (Very Long Instruction Word) design. The processors were used in Apollo's own Domain line of computers, with a PRISM II processor already being planned and designed. After the acquisition by HP in 1989, Apollo products were integrated into the HP line up, the workstations were carried on for a few years under HP/Apollo branding. HP consolidated Apollo into their workstation business unit with Apollo co-branding on the HP 9000 RISC workstations for a few years but in the end HP concentrated on PA-RISC.

PA-RISC was used for many research projects in the late-1980s until the mid-1990s, a time when microkernels were popular in research. Many research operating systems were Mach-based or leaned on it, from HP, Open Group (OSF) and the University of Utah. The content on these systems has been split out into separate pages with details:

Only MkLinux and Mach 4/Lites were publically available, the others required licenses for commercial or NDA source code they contained. Interest in Mach died down and the ports were suceeded by open source ports in the early 2000s, which borrowed heavily from their code and documentation. Mach was commercialized eventually with NeXTSTEP on PA-RISC in 1994, and iconic Mac OS X, itself based on Mach and influences from NeXTSTEP.

OpenPA RSS feed with all news.