OpenPA is an open information resource for HP PA-RISC based computers and technical architecture, a registered serial publication with ISSN 1866-2757.

PA-RISC is a RISC computer architecture designed by Hewlett-Packard in the 1980s and used in a range of HP 9000 and Visualize workstations and servers between the 1980s and 2000s. Some PA-RISC successors based on the HP/Intel Itanium architecture are also covered. This site is a non-commercial resource for information on these systems and technical details. First published in 1999, OpenPA is regularly updated and has been maintained for over two decades after launch.

Paul Weissmann is the editor of OpenPA and also publishes OpenKRITIS, a platform for operators of critical infrastructure. He can be reached via email.

An OpenPA Print Version PDF version of the complete project is available with 358 pages.

OpenPA.net was founded in December 1999 at a time when Google just started and Wikipedia did not exist yet. The idea was a central independent resource for information on PA-RISC Unix computers, widely available in the second-hand market of the late 1990s and early 2000s. OpenPA development and contributions peaked in those early years with a lively community around PA-RISC and open source systems.

This site was started in 1999 when second-hand PA-RISC systems became affordable to hobbyists after being phased out in the industry for modern COTS Windows NT or Linux servers. Not much PA-RISC information was readily available on the web when other popular Unix and RISC platforms were documented rather well. An 715/100 from a local newspaper ad started the interest and slowly led to an archive of PA-RISC documentation from the 90s available on the web — much of it from Mach and MkLinux projects. Edited into a simple web site with frames, it was published with hosting provided by Bill Bradford of SunHELP. The late Mickey appeared soon after, with lots of PA-RISC wisdom.

After two years, in 2001, the site was renamed to OpenPA.net and moved to its own Digital DECstation 5000 on 1Mb dialup. The increasing support from HP for the PA-RISC Linux project made a lot of official PA-RISC documentation available, with open source operating systems making significant progress, including versions of OpenBSD and Linux. Most of the HP 9000/700 and many of the lettered workstations were documented on OpenPA during that time, as were PA-RISC processors, chipsets and operating systems. 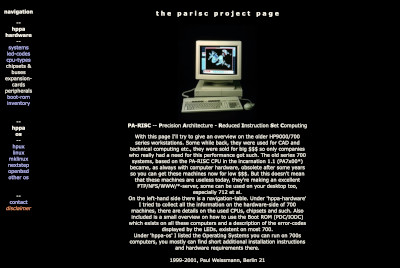 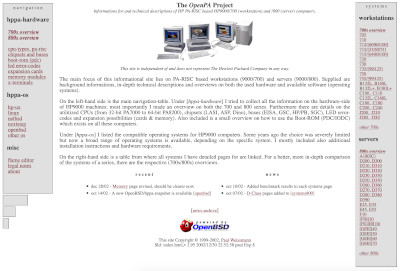 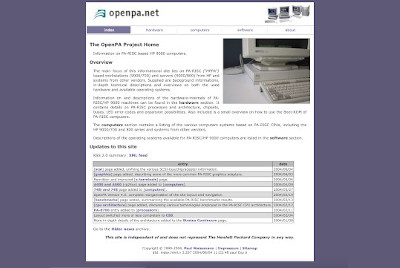 Updates became less frequent after 2005 with minor additions such as the PA-8800 and PA-8900 processors, PA-RISC architecture and operating systems. An OpenPA print edition was finally released with several hundred pages as PDF.

A spike of activity in 2008 resulted in lots of new content, with more PA-RISC systems such as the 64-bit workstations and rp Series servers, mainframes such as Convex SPP, V-Class and some early HP Itanium. Information on the fringes of PA-RISC was added, including third-party processors and OEM systems from Japan and early-1980s PA-RISC computers.

Update frequency and additions stalled considerably after 2008 with mostly low-intensity maintenance and some reshuffling of content. Much of the original HP documentation disappeared during the last decade, so most links to original sources and references were removed. Interest in and support for PA-RISC in open-source systems dwindled as well. Major housecleaning was done several times from 2016 on, checking links, content and rewriting much original language. Some new additions included the PA-RISC timeline and original equipment prices, a new OpenPA print edition and some restructured sections.

Many pages were updated, bad ideas from previous years (decades) were reversed and some severely outdated text updated. There is still some old, original content scattered throughout and many ideas to be implemented — and stories to be written around PA-RISC, HP 9000 and the opening up of the 1990s and 2000s. We’ll see. 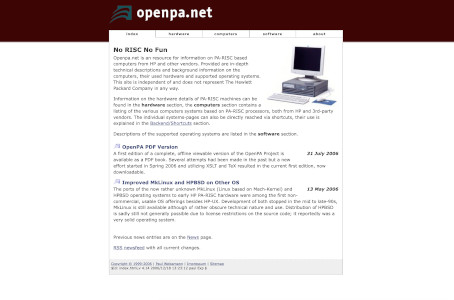 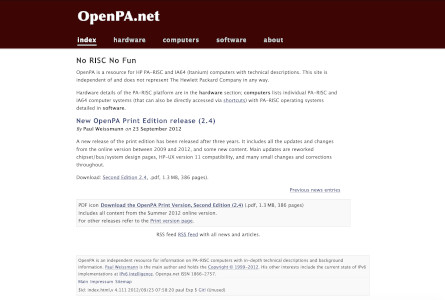 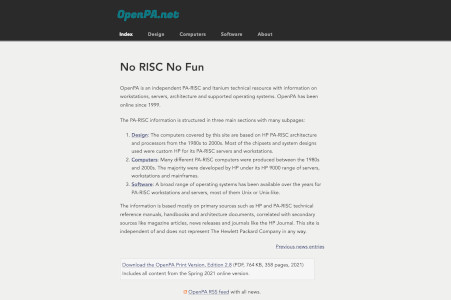 Paul Weissmann is the maintainer and author of OpenPA. Many people helped OpenPA with contributions and support since 1999, thanks go to:

The copyright of the content on the OpenPA.net pages belongs to Paul Weissmann, Berlin, Bonn, Palo Alto, San Francisco, unless otherwise noted. This site © 1999-2022 Paul Weissmann. No parts of this site may be reproduced or copied without prior written permission. Commercial use of the content is prohibited. Legal notes are on the Legal Notes page.

The information on OpenPA.net is based mostly on primary HP sources such as HP and PA-RISC technical reference manuals, handbooks and architecture documents from the 1990s. This knowledge base was extended and correlated later on with secondary sources like magazine articles, news releases and journals like the HP Journal. Since many original sources and documents vanished during the 2010s, much of the later content of this site made more use of secondary sources and industry articles.

PA-RISC CPU, chipset and architecture: These articles were mostly based on primary sources from HP like the great HP External Reference Specifications (ERS) documents and technical publications from HP CPU and chip design labs made available during the 2000s for HP-supported open source projects. Secondary sources in the form of articles or academic papers were used as well.

Computer systems: Information on the HP 9000 and PA-RISC computers is based on primary sources from HP and vendors in the form of system user guides, technical handbooks and architecture white papers. Also included in the research and collection were marketing brochures, news articles and industry reporting.

Operating systems: The pages are either based on official user and admin documentation as well as academic papers, talks, whitepapers and such. The heydays of open source, Mach, Linux and BSD research systems from the 1990s resulted in much information on public websites. As much of the operating system development on PA-RISC centered on the 1990s, information is getting sparse now.

The Internet never forgets: A process that had started in the mid-2000s accelerated in the 2010s with many sources on the web from the 1980s and 1990s disappearing. Journals have closed or lost their archives, websites just vanished, companies merged removing old documentation in the process and memory just faded after all these years. This pertains to most original HP documentation on HP 9000 and PA-RISC, contemporary news articles from the 1990s, news releases, price lists and so on.

It got quite difficult since to write and update articles based on ever fluctuating sources. This might just be the transitional nature of the Internet, but it was surprising to see so much go after doing this for two decades.